While working as a corporate employee at Countrywide Home Loans in California, I came across a print of “The Blind Leading The Blind,” by 16th century master Pieter Bruegel the Elder. Even though I am not an art connoisseur, it struck me immediately as a wonderful painting. In it, a blind man leads a group of peasants with a stick, and all of them are either falling or headed toward a ditch. The print reminded me of the leadership at my company, and I posted it conspicuously on the wall of my cubicle. I was expecting to be reprimanded or warned by my superiors, but perhaps Bruegel was more dead-on than I though: the item went unnoticed. A few months after I posted the picture, the company’s CEO, Angelo Mozillo, was blamed and investigated for his participation in the mortgage crisis of the mid-2000s; Countrywide soon closed its doors.
Having experienced Bruegel’s depiction of poor leadership firsthand, I looked up more of his art. There are plenty of fabulous examples of it all over the Internet and in print. Two pieces caught my imagination: “Big Fish Eat Little Fish” and “The Misanthrope.” The first is quite easy to understand if you have ever heard of corporate mergers and acquisitions. The second was fascinating to me, even though I could not recognize its meaning right away. I didn’t even know what the title meant. I had to look up “misanthrope” to learn that it is a person who hates humankind. In the painting, an old man is inadvertently being robbed. His path is filled with thorns, and the caption at the bottom reads: “Since the world is so unfaithful, I am in mourning.” 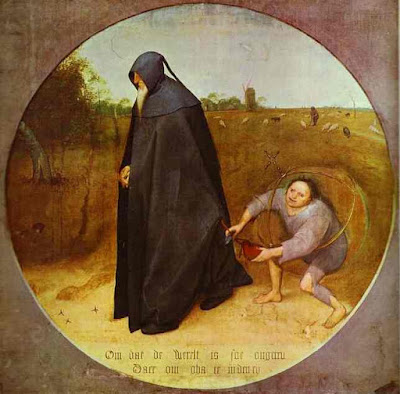 Every so often I would look at the picture and wonder what it meant. I refrained from reading interpretations as I find that art critics often know too much and understand too little. The answer came to me one day while traveling. I was going up a flight of stairs at LAX when a neat young tourist exclaimed to the woman that was with him, “I hate people!” Wait a minute, I thought, aren’t they people?
From then on I began to glimpse why I just didn’t get that painting. It conveys great disillusionment in mankind. The old man has no faith, and as a self-fulfilling prophecy he is being robbed. He is walking toward thorns, while in the background a shepherd enjoys his life, oblivious to bitterness.
People in my line of business –marketing– are diametrically opposed to The Misanthrope. We tend to see the good in people. We are inclined to talk to strangers often. Everyone is interesting, everyone has a story. That is why I didn’t get Bruegel’s painting for so long. It just didn’t fit my logic.
Not long ago I joined a “tribe.” It is a group of people that enjoy helping others grow their business, even though for the most part they are total strangers. The literal opposite of “misanthrope” is “philanthropist” or one that loves mankind. Even though the term is reserved for those who make grand contributions, I think that the people in my tribe are true philanthropists. Indeed, this generation of entrepreneurs is far from selfish or arrogant. Social media thrives largely on the generosity of everyone involved. We live in an era of sharing of ideas, concepts, models, images and everything that can contribute to the well-being of others.
Bruegel perhaps intended to subtly show what was wrong in his society, and  through his art encourage others to behave otherwise. More than four hundred years after he embedded his wonderful vision on canvas, his spirit is shared in more powerful ways than he could have ever imagined.
–MM

17 thoughts on “The Misanthrope”