A few weeks ago CNN published a story about a recently discovered sketch. The drawing, a small 3.5″ by 5.5″ sketch of a man facing left, is definitely reminiscent of other Leonardo sketches, but the researchers weren’t sure whether this was the work of a student or of the master himself. While everything seems to point Leonardo, the article fell short about my main curiosity: whether this was this a self-portrait or simply the sketch of  a generic man.

Among other elements, the authenticity of the sketch has been inferred by:

What was not mentioned in CNN’s article, but was publicized on the sketch’s official website Leonardo Rediscovered, is that the drawing may be the earliest known self-portrait by Leonardo da Vinci. More remarkably, the sketch has traces of ink that would make this the only signed drawing by the Florentine.

Such an exciting discovery merited further study. The available images on the Internet and on the official website were of low resolution, so I contacted Cristina Gerbino, daughter of the sketch’s owner. She kindly sent me a high-resolution image: In addition to the expert findings, I found further indication that this is indeed an early da Vinci self-portrait.

1. Verbiage
Da Vinci had a very peculiar way of jotting down his thoughts, often using repetitive words in different contexts within the same sentence. Note these examples from his notebooks:

The newly-discovered drawing has a scribble at the bottom which was later erased. The writing was analyzed on the “Leonardo Rediscovered’ website and brought back by lighting methods and simple retracing, rendering this image: 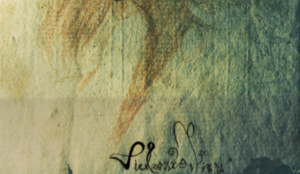 This was translated to “This way I go doing this myself” which is a roundabout way of saying “I drew myself.” The verbiage is consistent with a typical da Vinci sentence.

2. Tracing and Finishing
By manipulating the contrast and exposure, telling details of the sketch emerge. From the detail below one can see the original tracing  (and almost the speed with which it was made), and how the final details of the facial features and hair were added. These elements are very consistent with other sketches by the Renaissance master.

3. Anatomic Dimensions.
The most remarkable aspect of the sketch to me is the sheer resemblance of the subject to the known self-portrait:

The sketches were made about 40 year apart, yet the dimensions correspond perfectly, and the age progression looks consistent. I traced the outline of the skull and re-sized the sketches. The result is a perfect match of the proportions of the forehead, pupils, nose and mouth. One can’t help but to think that the man drawn is the same subject. This is my comparison:

All of these elements, plus the already established conclusions by the scholars, point to the very good possibility that this is indeed Leonardo da Vinci’s earliest known, signed self-portrait.

While working as a corporate employee at Countrywide Home Loans in California, I came across a print of "The…